I made it to the School Newsletter

so, I was featured on school newsletter, obviously ;)!

In case you missed it, here is the newsletter: 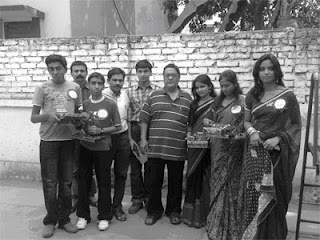 FAREWELL CLASS OF 2010
The theme of the farewell programme revolved in nostalgia that overcomes every outgoing student at the time
of farewell. Their time has come to say goodbye and step into the future. As they give a last look at their school, thoughts like  the  following could perhaps be in their minds:
The time has come,
For closing books and long last looks must end,
And as I leave,
I know that I am leaving my best friend,
A friend who taught me right from wrong,
And weak from strong,
That's a lot to learn,
What, what can I give you in return?
The annual Farewell Party, like previous years was organized by the current class X in collaboration
with their friends of classes IX and VIII and the juniors. The organizing committee spared no effort to make this farewell event
a memorable one. The planning and execution of the programme was entirely done by them.
On the 24th of April, the Class of 2010 was invited to the grand Farewell Party, along with teachers of both Playland
and St. Mary’s Primary School. The programme began with a series of dances, songs presented by the children.
The juniors - Abhishek Ghosh, Ayesha, Rajlakshmi, and Ayush presented two lively dances that thrilled the audience to the core.   Shivam Gupta (VIII) sang, “Seasons in the Sun” on the occasion.
There were also a variety of dances and quizzes for the outgoing class. Upsana Bibha judged the best speaker
and her batch mate Himadri Sinha was selected for the best dressed girl...  Mementos were presented to each of the outgoing
students by Mr. Allen Johannes
The programme concluded with a sumptuous lunch for everyone. The food was excellent. The kids had arranged a dosa man in the campus to provide piping hot and delicious dosas .The dessert was also superb.
Shivam Gupta, Ravi Prakash and Satyam have jointly prepared a video of the entire program. It turned out to be the handwork of professionals.
Sincere thanks to Miss Marianne Johannes of Playland and Ms. Mita Verma for guiding the organizers of the programme.
The 2010 Farewell was an immense success!   The dance sequences was choreographed by Bipul Agrawal (x)
Thanks to one and all!
School Calendar
1st Unit test commenced from the 10th of ay
School will be closed for the Summer Vacation from 17th May
School will reopen on 28th June [morning school schedule]
Summer Assignments: has been allocated to the children in the Holiday Homework copies. Please insure they
complete the assignments.
It is highly recommended your child be encouraged to read at least one story book during the holidays.
Class X (2011) should throw themselves into preparing themselves for the Board Exams next year. This is   best time to study.
This is the best time to study. Don’t waste your valuable time.
In the News:

Shivam Gupta has developed a 3- animation game which won great press reviews last December. The game created by him is called Terror Attack: Project Fateh which is soon to be released worldwide by India Games Ltd.  Mumbai. Shivam has become a sort of hero with gamers the world over, writing to him on Twitter.
Rachit Kinger (25 ) an alumni of our school has published his first book “ The  Squirrel Who Wanted To Fly   wrote to us in  Face book “I  cannot forget the times I had in St. Mary's - they are special for me and some of the friends I made there will be with me forever. Haven't had the chance to say this before to you but thanks a lot, sir.”
Cricketer in : Saurav (Class X) has taken leave from school. He has been selected to play for the under 17 Indian Team in .
Mother’s Day: - On the 7th of May     “Mother’s Day “  write up contest was organized for the children.
The winners of the best slogans were:  Hashil Arora. Roshan and Anand of class IX, Satyam, Saima and Monika
of class X Nausheen and Shiva of class viii,   Robin Francis and Satyam of class V and Rajlakshmi of class III .
The winners received gifts to present to their mothers.
Thought:
Write down all the great things about everyone you know. Make a huge list of all the
wonderful things about you. Compliment people wherever you go.
Praise every single thing you see.
Be a ray of sunshine to everyone you meet, and make their day better for having seen you.
Say "Thank you" at every turn. Walk, talk, think, and breathe appreciation and gratitude
at 1:41 AM