When I first started hearing about those social networking sites like orkut and facebook, i thought i should try it. I tried orkut, it was not interesting i still don't get it why people use it all the time besides using facebook. Then after my crush told me to add her on facebook, I opened an facebook account and I found it very boring. I have only 1 friend and all i can do is check her profile and write on her wall. Why should I even update my status if nobody reads it?

After 8 months, when the medias got me (thanks to indiagames), my friends on facebook lifted to 104. And most of them are my real life friends, now my facebook is interesting and it have lots of things to do. Now, that is the time when it starts getting interesting and addictive.

When I saw celebrities tweets as news, I thought twitter sounds like fun, I should try it. I immediately opened an account on twitter. Twitter can become very addictive and interesting too if your 'real life' friends are on it and tweeting frequently.

In the race of social networks, the winner is: lets see your self how much difference is between Facebook, Twitter and Orkut. 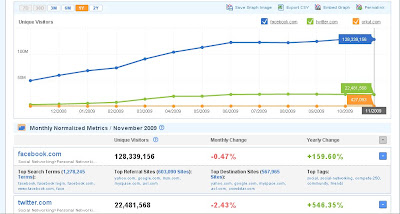 So, orkut is a loser and Facebook wins the race this year!

So, whats’ next? Will Facebook eventually monopolize? Will Twitter catch up? Will Google throw out a curve ball to unsettle things in the social sphere? Is there something else out there that will turn the tables around?

I guess time will tell.